This is not a painting. 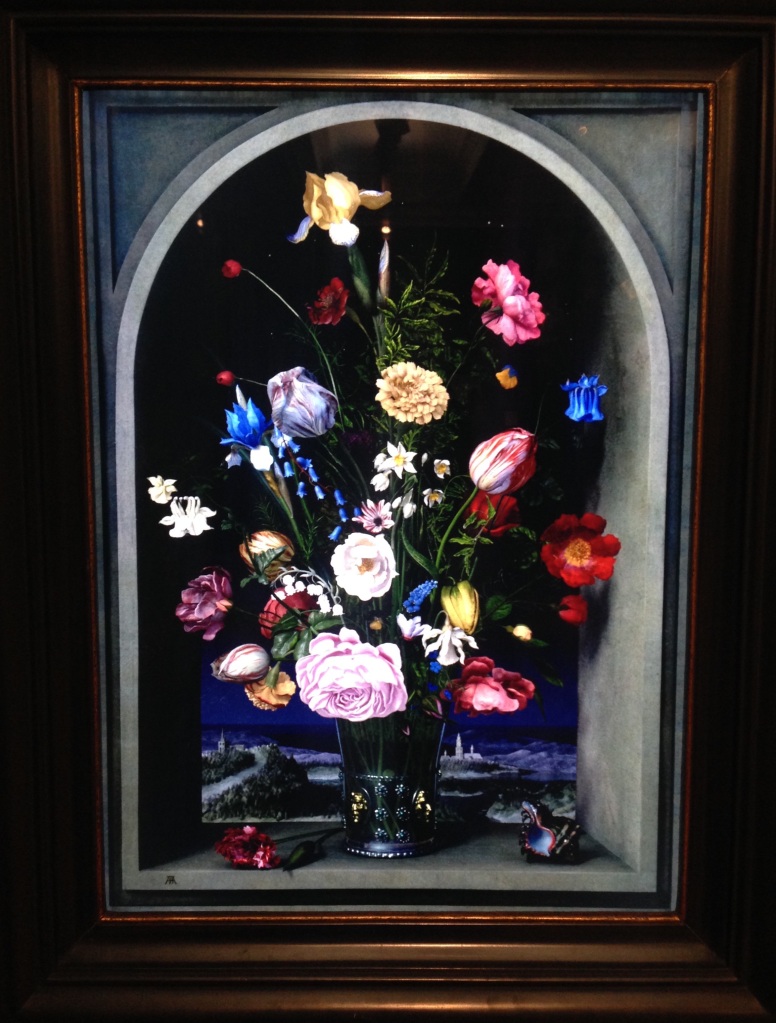 No, really. I don’t mean that in a Rene Magritte, ‘ceci n’est pas une pipe’ kind of way. This is not a painting. In fact it doesn’t use any of the traditional artistic mediums. This is an homage to a painting; a three-hour long looped film being shown on an Apple Mac cleverly concealed inside a wooden frame. It’s an exact replica of one of the most famous Dutch still life paintings, ‘Vase with Flowers in a Window’ by Ambrosius Bosschaert the Elder, 1618.

Dutch still life paintings from the 17th century used to be a particular soft spot of mine, but you’ll be relieved to hear that after I made the mistake of committing to write 5,000 words on the subject based on source materials in Swedish, German and Dutch (three languages I don’t understand), it’s kind of out of my system. I’m more likely found in the Contemporary, Modern, Impressionist or at a push Pre-Raphaelite rooms of a gallery these days than trying to decipher the possible allegories within a Dutch still life.

In the case of this work by Rob and Nick Carter from 2009-2012, it is the non-still life aspect of the piece that brings the appeal. Seemingly static, if the viewer looks at the screen closely they can see almost imperceptible movement, as if the flowers are moving slightly in the breeze, opening and closing depending on the time of the day, truly bringing the work of an Old Master to life.

The piece was made through digital visual effects, and provides a bridge between the original living subject matter of the work, and the finished painting, which is currently hanging in The Hague. There are various schools of thought as to the meaning behind still life works from this time; originating from a Protestant culture where religious iconography was banned, artists turned to objects in everyday life. Whether the incredibly detailed images were simply a celebration of the beauty of nature, were endowed with some kind of biblical meaning, or took a more morbid turn to become a Memento Mori (roughly ‘remember death’) has been the subject of much discussion.

Carters’ piece cuts through all of the white noise of this debate, and roots the subject matter back in pure-and-simple reality. The vibrancy and beauty of the picture, with a constant subtle shimmer, made me want to gaze at a real vase of flowers with the same intensity, hunting down any little twitch of movement. And in my book, any piece of art that encourages the viewer to go out into the world with fresh eyes and a fresh appreciation of beauty is a wonderful thing.