I love Liverpool. It’s probably not very cool to admit to that, especially when I live in the centre of Manchester, a city which inspires a competitive loyalty greater than any football team. I don’t know what it is; the tendency towards sunshine, the monumental buildings, the melting pot of cultures, or the borderline-aggressive niceness of its inhabitants, but something about Liverpool just feels good for my soul.

From an architectural point of view, Liverpool cannot fail but to impress, with a variety of scale and heritage that is rarely seen in such a confined space. The mixture of buildings along the waterfront alone is incredible, with the Victorian Liver building next to Art Deco air vents, 60s office blocks and the contemporary Mann Island, with breathing space between to allow views across the water and along Albert Dock. The sheer variety means that the cityscape feels fresh and interesting, unlike many cities where the visitor falls victim to skyscraper fatigue and is too overwhelmed to lift their eye above the parade of generic shop fronts. 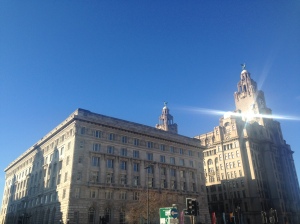 The Cunard Building and Royal Liver Building at Pier Head

In a day spent in a series of meetings, walking around Liverpool brought a genuine pleasure even while I was manically checking Google maps for the location of my next rendezvous. Prolonged contact with Liverpudlians makes you realise just how much a love of the city runs through the veins of its inhabitants. Even the people who grumble about it complain in a manner normally saved for family members; in a ‘no one insults my Mother but me’ kind of way.

For someone that enjoys digging below the surface of what makes a place tick and how it works, Liverpool could never be boring. It remains astounding to me that within a 20 minute walk I can go from glass-towered offices, through Chinatown, the Victorian warehouses of Baltic Triangle, the Tate’s world-class art collection, high street shopping malls, and along the waterfront to be faced by the gravitas of the Three Graces and the grey profile of Birkenhead across the river. 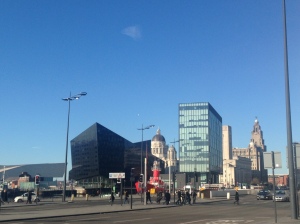 The view along the waterfront to Mann Island and Pier Head

As a city abandoned to recession by the ruling powers until very recently and a victim of ‘managed decline’ in some parts, Liverpool has retained a sense of heritage and honesty that many towns and cities have lost in the face of gentrification. There are bars, cafés and restaurants that have a real spirit and rawness that you wouldn’t find in Manchester or London, where ‘rawness’ has become a forced aesthetic that equates more with gratuitous exposed brickwork and steel girders than any genuine history.

Ringo Starr said, ‘people in Liverpool don’t move very far you know’, and once you spend any time there you learn that that is not because of a lack of ambition. Liverpool was the powerhouse of transatlantic cruise travel, the origin of pensions, the home of architecture that enabled the creation of the skyscraper. While its heyday may seem long gone to some, Liverpudlians are no fair weather friends, and will stick by their city until its glory years come round again. 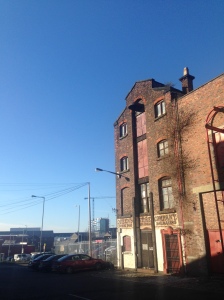